In the 1990s movie Forever Young Mel Gibson plays a fighter pilot who has himself cryonically frozen. The year is 1939, and when Captain Daniel McCormick is accidentally unfrozen half a century later let us just say it does not go well.

To be clear, the cryonics of Hollywood is a far cry from a Kiwi invention that is set to create a new $100 million export industry with applications for everything from the space race to fertility treatment.

Christchurch engineering and manufacturing company Fabrum Solutions has turned a cryocooler developed in a government science lab into a commercial product that is solving a multitude of industrial problems.

NASA is using one of its cryocoolers to freeze carbon dioxide as part of the Mars Lander project. “There are a whole range of uses we never appreciated when we started on this journey,” Co-founder Christopher Boyle says.

Fabrum has formed a joint venture with French cryogenic engineering company Absolut System, called AFCryo, and has capacity to manufacture around 200 units a year at its purpose-built Christchurch facility. Its aim is to capture a portion of the annual $2.4 billion international market for cryocoolers.

“If we get it right, there’s potentially $50 to $100 million of exports that this country didn’t have previously,” Christopher says.

A cryocooler is a fancy refrigerator used to turn any atmospheric or natural gas into a liquid at very low, or cryogenic, temperatures – from -170º C to -250º C.

Cryocoolers work using a compressor, and the problem was that over time oil vapour from the moving parts would get into the cooler’s helium working gas. Old-style cryocoolers were unreliable; they required regular servicing, and usually failed completely after a few years.

Former Crown Research Institute Industrial Research Limited (IRL) – now a part of Callaghan Innovation - developed a cryocooler with a compressor that is hermetically sealed. It means the contaminants stay out of the helium working space and the cryocooler can keep running indefinitely. 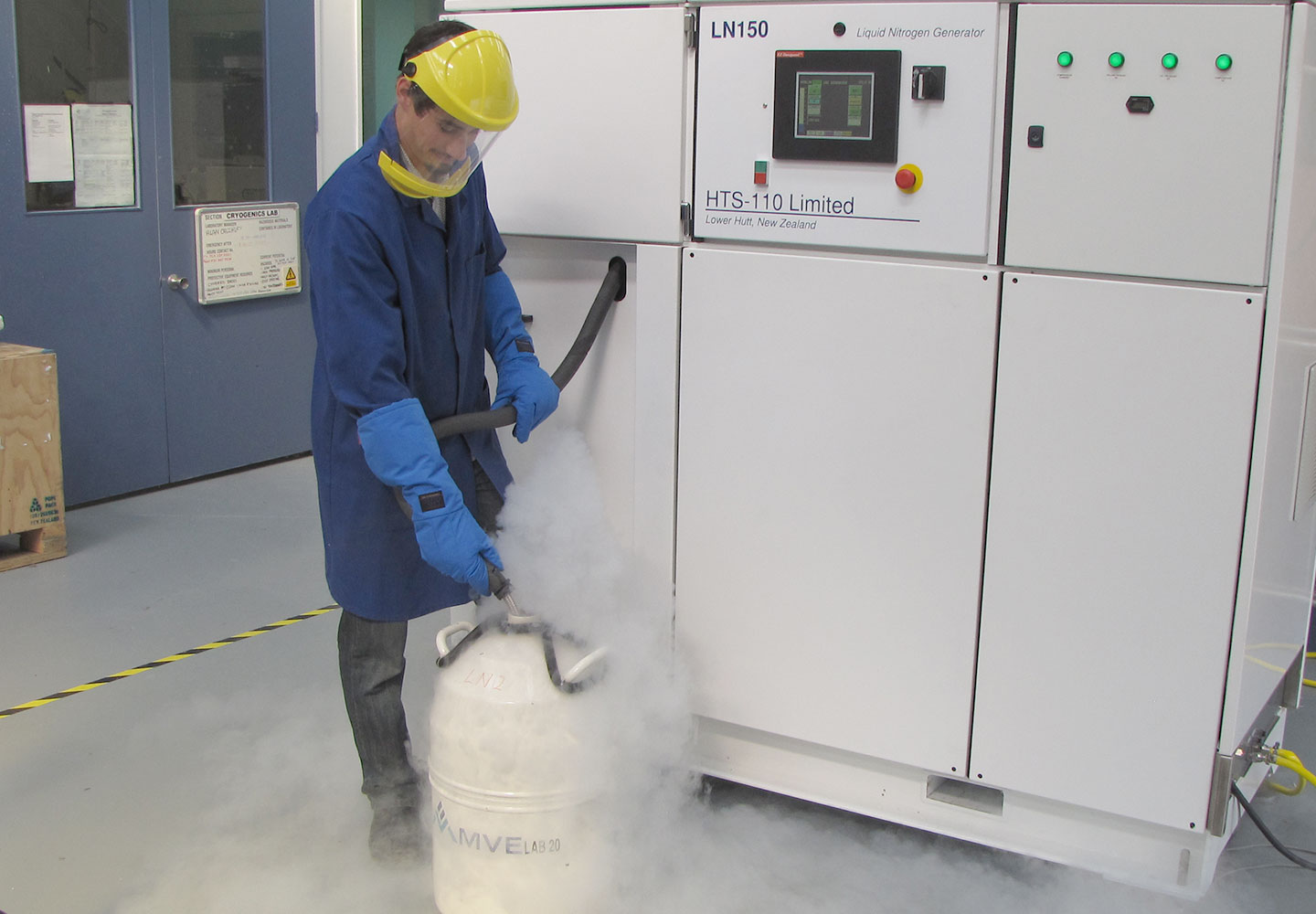 When Fabrum Solutions took on the task of commercialising the technology in 2014 its first focus was on manufacturing cryocoolers that could produce on-site, on-demand liquid nitrogen. Then it received an unlikely approach.

CLSS (Cryo Life Support Systems), delivering a project in conjunction with the US National Institute for Occupational Safety and Health and NASA, were developing bioshelters for the American mining industry. The bioshelters are an underground haven in the event of an emergency and contain enough bottled air to keep miners alive for 30 days.

The only practical way to store that much air is in liquid form, with one litre of liquid air equating to 750 litres of the breathable stuff. “That’s what drove their interest in our technology,” Christopher says. “We were approached because they needed a robust cryocooler. So along with them we developed the first liquid air plant.”

Since then Fabrum has discovered an array of applications for the technology it had never thought of.

The liquid air systems have a double benefit for anyone working in hazardous situations requiring the wearing of a SCAPE (Self Contained Atmospheric Protection Ensemble) or Hazardous Environment suit, such as firefighters and military personnel. Not only is the wearer able to carry a backpack of liquid air which allows them to work in the situation for longer, evaporation of the liquid provides a cooling effect in the incredibly hot suits, Christopher says.

The cryocoolers also allow for on-demand liquid oxygen wherever it’s required, from air ambulances to remote military bases. They are also used for producing liquid nitrogen to preserve semen as part of animal artificial insemination programmes and human fertility treatment.

As Europe moves towards zero emissions of methane, the cryocoolers can be used to re-liquify the methane that is vented off LNG when it is transported.

Fabrum pours around 30 per cent of its turnover back into R&D and has partnered with Callaghan Innovation at each step of its journey, Christopher says. Some of the agency’s staff moved over to the company as part of the technology transfer, and Fabrum has been supported with R&D Project and Growth Grant funding.

Alan Caughley, the scientist behind the original IRL breakthrough, is these days Team Leader Mechanical Engineering at Callaghan Innovation and has worked with Fabrum throughout the commercialisation project.

“We were running really hard as a combined team for several years, with our engineering team helping them put the early prototypes into the field,” Alan says.

“This has been an amazingly successful technology transfer. Creating a mid-range refrigerator that produces a useful amount of liquid has been something of a holy grail.”

He points out that Sir Paul Callaghan, namesake of Callaghan Innovation, said New Zealand’s strength lies in the “weird stuff” others don’t think to exploit.

“Who on earth would have believed that in New Zealand we’re making a world-class cryogenic refrigerator?”