This article was published on 16 October 2017

Ten teams, six weeks, and one grand prize on offer. We report back from the second (and final) Bootcamp for #CPrize2017, to look at how far the teams have come.

Friday 13th might be unlucky for some, but not for this year’s C-Prize finalists. Because that was the day we all converged in Auckland for Bootcamp #2. With just six weeks to go until the teams stand in front of the judges, the schedule was packed with activities – one-on-one time with experts, practical help, and exercises to keep their creative juices flowing.

We were hosted by our sponsors, AUT Millennium, on their impressive North Shore campus. Home to world-class sporting facilities and a renowned centre for clinical research in health and fitness, it was the perfect place to talk about pushing the boundaries. Spotting NZ Paralympian (and double-gold-medal-winning sprinter) Liam Malone working hard on the running track that morning provided even more inspiration for the attendees.

The day started with an introduction from a rather zen-like Programme Manager, Colm Kearney, who laid out the structure of the day, and reminded the teams how far they’ve come since the first Bootcamp back in August. Next up, Wayne Eltringham talked about the role of Callaghan’s Regional Business Partners in helping innovative NZ companies grow, no matter where they’re based. Then the teams had some time with their ‘Buddies’, to talk through challenges like working with end-users, and communicating their idea in simple language. 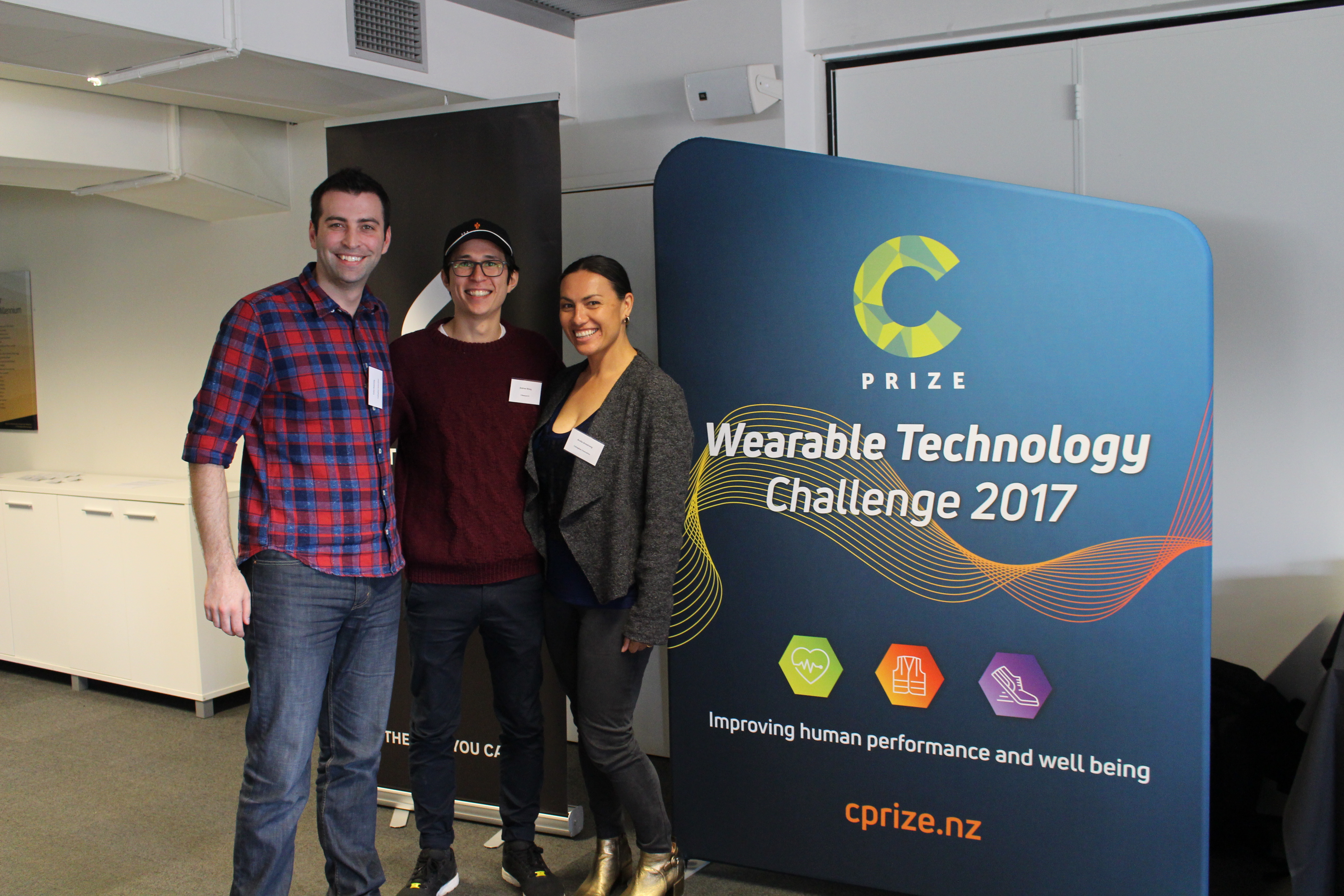 Andrew Wong from IMeasureU was the first external speaker of the day, and he held the audience’s attention with his story of the company’s bumpy journey from university spin-out, to acquisition by motion-capture giant, Vicon. Andrew stayed for the rest of the morning, and chatted to each of the teams about their technology and their business plans. He also had a couple of specific nuggets of wisdom to share with the finalists – “Surround yourself with people that have clear business know-how, and be prepared to fail – while it's a lot of fun to build a product, it’s a whole different story when you take it to market. But just keep at it - there'll be times when you'll find yourself wondering if it’s worth it, but if you if you really believe in what you're making, you'll come out on top.”

After a quick coffee break, Jesse Keith and Kirsten Edgar ran an activity on prototyping, but rather than focus on any current developments, they set a specific challenge – to design a futuristic technology that would give everyone a ‘great hair day’ in 2032. They mixed the teams up, gave them some ideas to get started, and 30 mins later, each group presented their ideas…. And let’s just say that in their version of the future, traditional hairdressing has some serious competition! The finalist teams were reunited for the next phase of the day. Moderated by Blythe Rees-Jones, they took part in a ‘sharing circle’ discussion. This gave each team the opportunity to talk about their current prototypes, identify any challenges they’re still facing, and to ask for help and advice from the others. Although the C-Prize is billed as a competition, this activity perfectly demonstrated the camaraderie that has developed between the finalists – they all want each other to succeed. 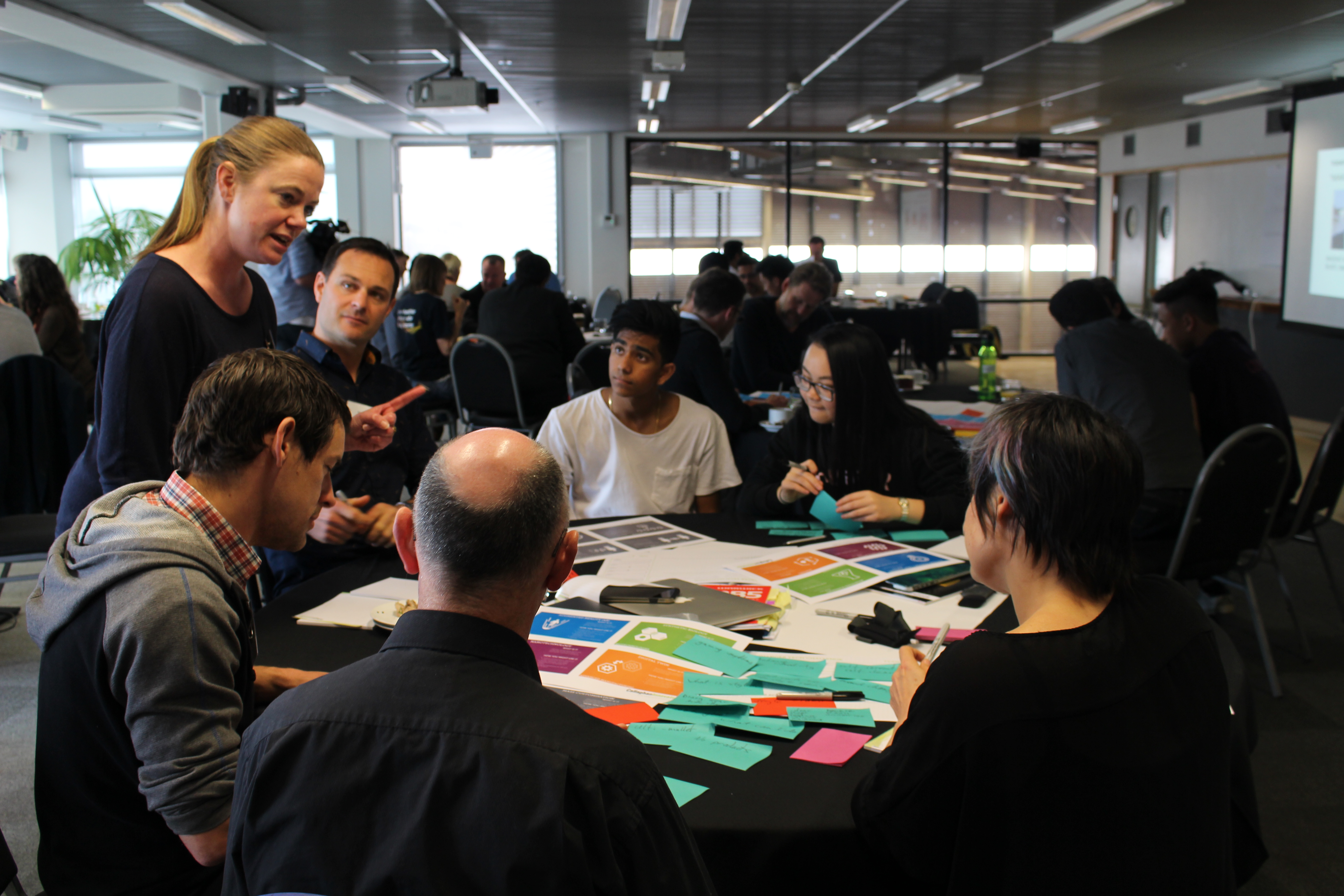 Lunch was followed by a tour of some of the facilities, led by Commonwealth Games swimmer and surf lifesaving individual world record holder, Laura Quilter. From environmental chambers, to motion-tracked treadmills, the tour highlighted just how much work (and science) goes into training world-class athletes. Sponsors Southern Cross then talked about marketing, and the need to tell the human story behind any new technology. After that, the finalists were up again – this time, they were challenged to identify the desirability and feasibility of their specific system, to hone in on the key selling points they should focus on when pitching to the judges. Luke Krieg mumbled through the first slide of his talk, titled, ‘How to give a good presentation’. But the puzzled looks quickly turned to smiles when the audience realised that he was fooling us, and was purposely demonstrating what NOT to do! In a few short slides, Luke brought the finalists on a storytelling adventure, urging them to focus on the ‘why’ of their technology, rather than simply the ‘what’. He set them an activity to write their own story, and encouraged them to practise telling  it before unleashing it on the judges on 1 December.

This was followed by a presentation from NZTE’s Ruth McLeod, who told the finalists about the various support programmes that they will have access to over the coming weeks, and then, it was down to Colm and Blythe to give the finalists’ some insider tips on what Judging Day will be like. And just like that, Bootcamp #2 was over. The finalists left the place buzzing with ideas, but so too did Callaghan staff who’d had their first experience of C-Prize. Business Innovation Advisor, Craig Shipman, summed it up when he said “I've been involved with a couple of incubators and accelerators, and this one's outstanding. The calibre of the ideas, and the finalists’ execution to date is truly excellent, and it reflects really well on the C-Prize and on Callaghan Innovation.”