And the winner is….

This article was published on 4 December 2017

C-Prize 2017 drew to a close at a very special Awards Night in Auckland.

The arrival of December usually heralds talk of Christmas trees, gifts, and travel plans, but for the ten finalist teams, the 1st of the month meant only one thing: C-Prize Grand Final Night. Callaghan Innovation staff, industry experts, the C-Prize judges, sponsors, supporters and representatives from each team gathered at AUT Millennium for what promised to be a celebration of the finalists and NZ’s wearable technology landscape.

As members of each team began to arrive at the venue, there was a palpable sense of excitement in the air, all traces of nervousness from ‘Judging Day’ now long gone. But, even so, everyone had their eye on the trophy, 3D printed at our new AddLab.

At 7pm, Luke Krieg opened proceedings, before introducing Callaghan Innovation CEO Vic Crone to the stage. Vic talked about the challenge of asking innovators to solve real-world problems, highlighting how far the teams have come in just four short months, and applauding the breadth and depth of their ideas. Quoting Sir Paul Callaghan, she continued, “We need to sow a variety of seeds to see what will flourish in New Zealand's innovation ecosystem.”

This sentiment was echoed by Hon Dr Megan Woods, Minister of Research, Science and Innovation, who found time in her packed schedule to join us on the night. She said that “A more productive economy… will be enabled by moving away from basic commodities, and exporting more diversified high-value, high-tech products and services. We need business innovation.” Speaking to the finalists, Dr Woods said “One of the most exciting parts of my role is meeting innovators around the country. You are key to New Zealand’s future.” 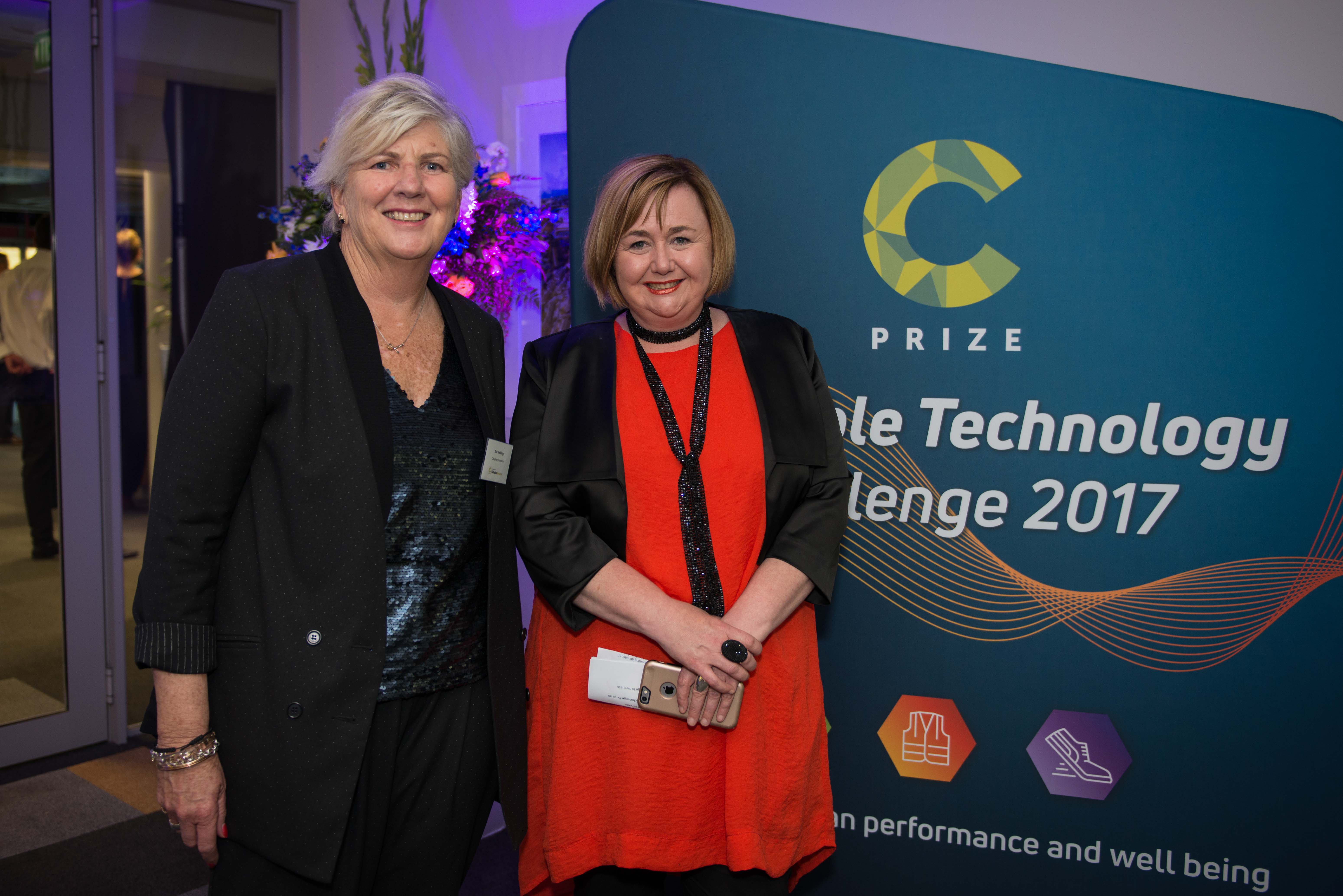 Next to the stage was Colm Kearney, Programme Manager of C-Prize, who quoted US President John F. Kennedy’s famous “We choose to go to the Moon” speech, saying “The reason we remember stories like these are because they involve people, and because they leave something behind that doesn’t come around all that often – a legacy.” Colm finished by urging the finalists to continue their work, saying “There are plenty of opportunities for your technology to make a difference, to improve, or in some cases, to even save the lives of people we love and care about. That is the legacy you can leave.”

Attention then turned to the large video screens, where a 5-minute video of this year’s C-Prize Journey was shown. Stories from the past four months – from the first Bootcamp, to their final pitch to the judges – were shared in the finalists’ own words.  That theme continued into the first ‘Meet the Finalists’ panel, where representatives from the first five teams – Hauraki, Rehabilitation Innovation, Quoralis, Bobux, and Photonic Innovations – joined Luke on stage for a revealing chat about the competition, and their future plans. As the teams left the stage, they were presented with a hardcopy-edition of their Journals. 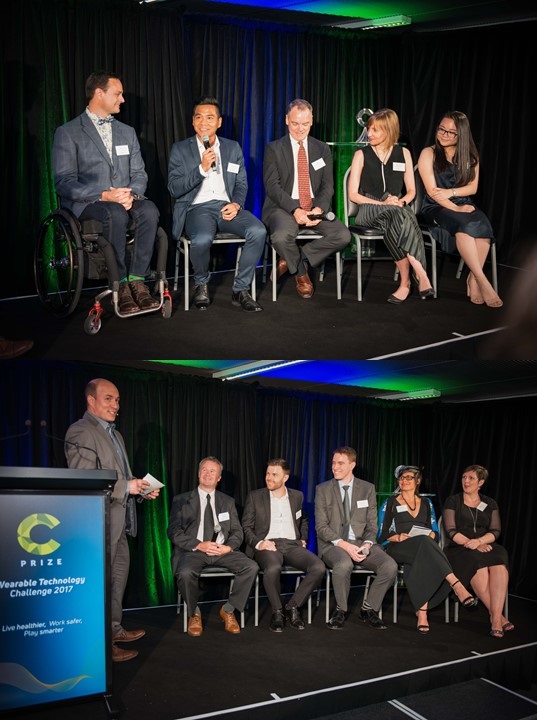 After a short break, we then heard from the remaining five teams – RippL, Uri-Go, Sculpt, Migo and UruSense. Some of their stories really put the competition into perspective, and reminded everyone how impactful great technology can be. The inspirational messages just kept on coming. After the second panel discussion, we were treated to a video message from Paralympic champion sprinter, Liam Malone, recorded especially for the C-Prize finalists, in which he congratulated them on solving important problems faced by real people.

And finally, it was the moment of truth. Vic Crone took to the stage once more, holding a golden envelope. After a drumroll, she announced that the winner of C-Prize 2017 was Uri-Go!

Mike, Brendon and Andrew arrived on stage, clearly elated by the news. Their development of a wearable sensor that uses radio waves to detect how full a person’s bladder is, could change the lives of millions of people living with spinal cord injury, Parkinson’s disease or numerous other conditions. Quoting the judges, Luke said “Uri-Go’s product deserves to be an international success. It’s a really great idea, and a highly-innovative hardware solution. The team has shown the talent to pull this off, and generated impressive momentum in their programme.” 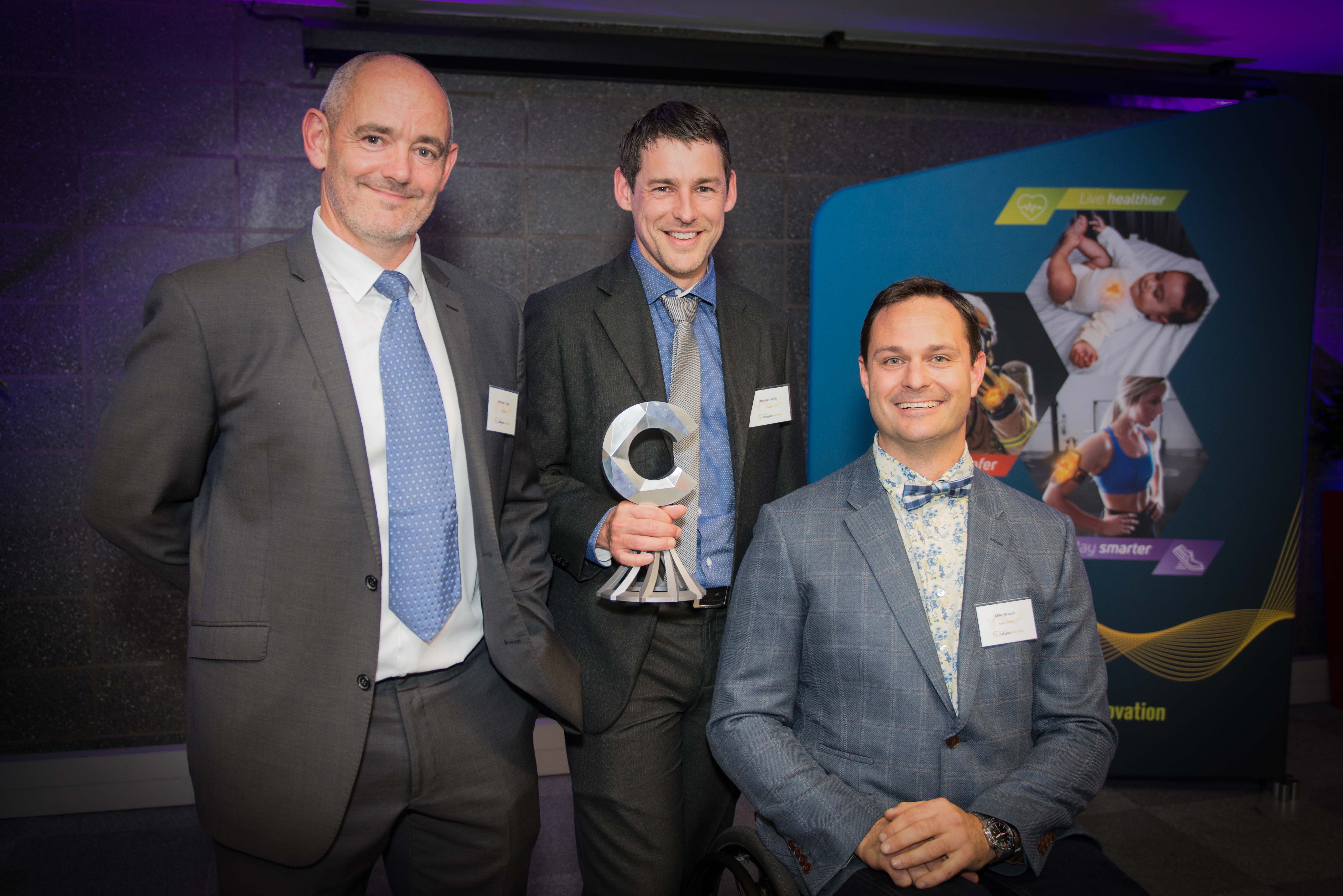 Andrew, Brendon and Mike from Team Uri-Go with the 3D-printed C-Prize trophy. Teammate Frank was not available to attend.

Before the team had the chance to say anything, they were faced by a Callaghan Innovation haka, led by our IoT National Network Manager, Jonathan Miller. Visibly emotional, Brendon talked about the time Mike first mooted the idea of developing such a sensor, which they promptly filed in the ‘too hard’ pile. He went on to say, “So we really have to thank Callaghan – if it wasn’t for C-Prize, we might never have even tried to solve this problem.” The team also went on to mention Frank, a consultant urologist and the fourth member of Team Uri-Go, and stated their commitment to keep going on this project. As Brendon put it, “Game on!”

Images from the event can be found on our Facebook page.