For cats and dogs, getting a monthly ‘spot-on’ treatment is a well-worn routine.

Now, thanks to some Kiwi innovation, sheep (and sheep farmers) are enjoying a similarly quick and easy treatment to keep parasites at bay.

Agritech business Donaghys has developed the world’s first combination spot-on technology for sheep. Its Scorpius Elite product can be used instead of oral drenching (which involves inserting the nozzle of a drenching gun directly into an animal’s mouth to administer medication) to combat internal parasites, reducing the time and physical effort required by farmers, as well as animal stress. 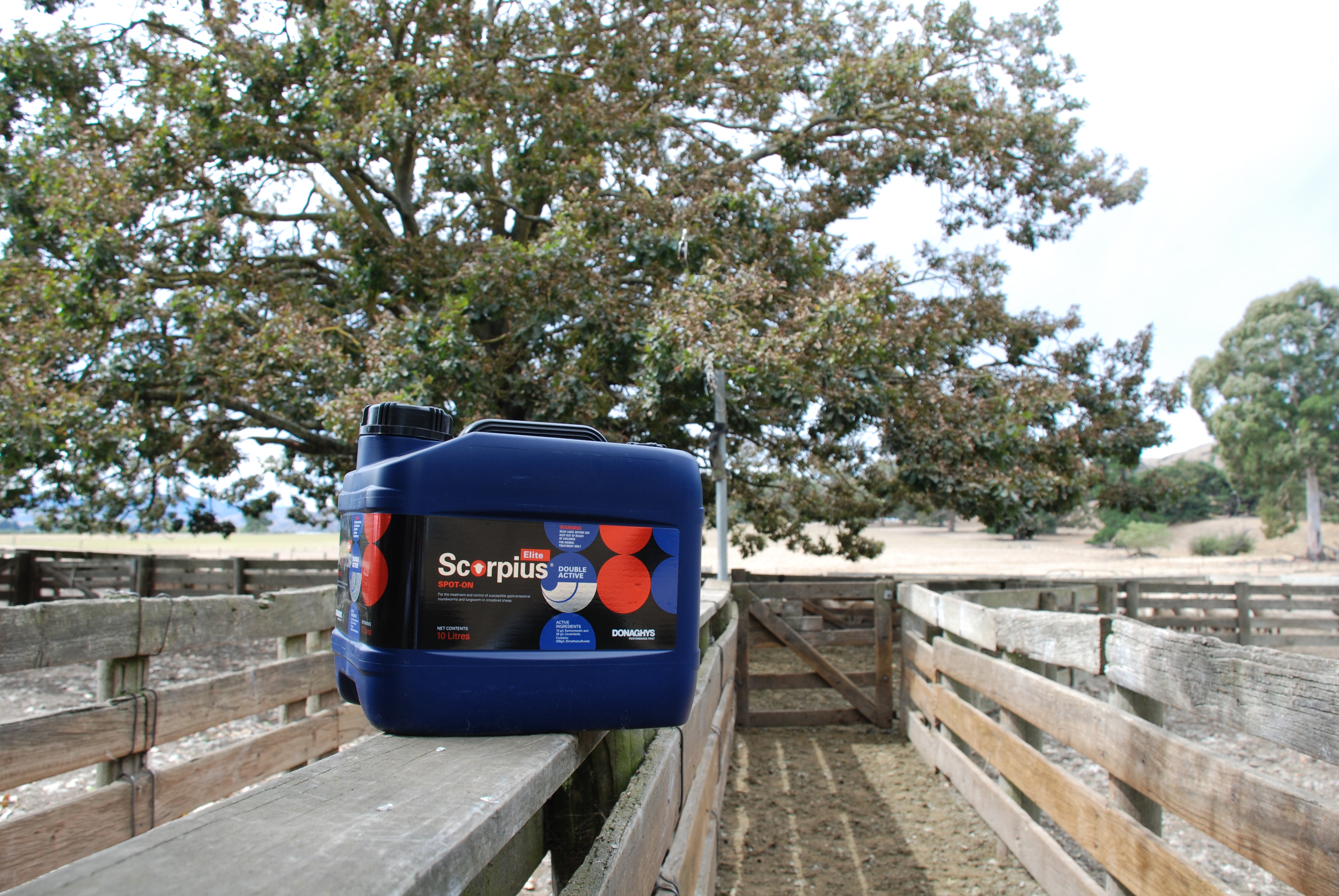 Donaghys has been a familiar name in Kiwi farming circles for generations. Founded in 1876 in Dunedin, it built a substantial business on rope and cordage – supplying farm essentials like baling twine.

However, explains Donaghys General Manager Agriculture Jarred Marfell, around 15 years ago competition began growing in this sector from large offshore factories. So Donaghys made a call: to diversify into higher-value agbiotech products by investing heavily in R&D.

“A key thing about innovation at Donaghys is where it comes from,” says Marfell. “It doesn’t just come from a scientist in a lab; it comes from the whole business and our customers. We’re all passionate about agriculture and always looking for ways to make life easier for farmers, or to take costs out of farming systems, or to reduce environmental impacts.”

The genesis of Scorpius Elite is an example. Almost a decade ago, Donaghys Managing Director Jeremy Silva was chatting on the sidelines of a netball game to a farmer friend who told him that drenching sheep over summer on his farm required the equivalent labour of a full-time employee.

Silva saw an opportunity to provide a better way, so he talked with Donaghys’ R&D team to see if they could make it happen.

While the business had previously developed ways to deliver medicines through the skin for cattle, sheep posed some unique challenges, such as how to get the product through their thick wool and lanolin (the waxy secretion produced by woolly animals).

The company also needed to develop a product that would remain stable while being delivered via the skin (rather than directly into the mouth) without, for example, breaking down in sunlight.

Donaghys’ patented formulation – applied between the shoulder blades using a drench nozzle pushed through the fleece – is innovative on a couple of fronts: it uses a combination of active ingredients to fight parasites, including one not used before on sheep; and it employs a unique combination of solvents and excipients to carry those actives through the skin and into a sheep’s bloodstream.

Putting it to the test

A significant challenge in bringing a novel animal medicine to market, says Marfell, is meeting the rigorous requirements of the Agricultural Compound and Veterinary Medicine (ACVM) registration process. In 2013 Donaghys received a Callaghan Innovation Project Grant to support the development of Scorpius Elite, which Marfell says enabled the business to carry out essential product testing to gather registration data.

“Because a product like this is so novel, the requirements for testing are very high; the testing takes a long time and is expensive,” explains Marfell.

“This is where Callaghan Innovation’s support really came into its own because it allowed a  business like ours to fast track that process. Callaghan Innovation understands R&D – that it can be time-consuming, expensive and that risk and failure are also part of it.”

Callaghan Innovation Agritech Customer Manager Justin Andrist has worked alongside Donaghys for more than a decade, during which time the agency has supported the commercial development of a number of the company’s innovations. As well as accessing Project Grants, the business has tapped into Student and Career Grants, Research and Development Solutions expertise, and events and programmes.

“We initially provided support for this project more than seven years ago, which shows the very long development pipelines commonly involved with commercialising this kind of R&D,” says Andrist. “It shows the serious commitment required for businesses to become successful in this space.”

However, Marfell says now the business has successfully cracked how to administer active ingredients through a sheep’s skin it has opened up a range of future opportunities.

“We’ll be testing some specific products over the next four to five years. In particular, we’re looking at combining other patents we have – around combinations of active ingredients – with the technology we’ve developed to keep the actives stable.

“Ultimately, it all comes back to that focus on making farmers’ lives easier.”