Smart Kiwi companies are deploying robots to gain manufacturing efficiencies and stay competitive – but these ‘cobots’ are there to work alongside employees rather than replace them.

Electronics manufacturer Nautech is celebrating 30 years in business this year, but longevity hasn’t made the company complacent.

To maintain its edge in the face of aggressive pricing and vast production capacity from its rivals Nautech has had to adapt and innovate, and robotics has played an important role.

Nautech’s use of robotics stretches back to 2002 and these days it has a series of ‘cobots’ working alongside 72 staff at its East Tamaki manufacturing centre.

“Nautech is now highly automated,” says co-founder and managing director Andrew Turner, who started the business in 1989 with his wife Alison. “It has allowed us to be more efficient, to the point that we now compete with manufacturing in China.”

In Nautech’s case, use of the UR3 collaborative table-top robot from Danish company Universal Robotics has been a game-changer in its assembly line.

Nautech is a contract manufacturer, taking on complex electronics production, from plan through to production. sIts manufacturing centre employs everything from 3D printers to laser markers to get the job done. There are soldering robots and glue dispensing robots and two UR3s in action, each of which can carry a three-kilogram payload and rotate 360 degrees.

“We use robots for soldering, glueing, conformal coating, inserting, screwing and wire making, pretty much anywhere we can,” says Turner.

The UR3s have been used in conjunction with a cut, strip, tin and crimp line, to fully automate the manufacture of wiring assemblies. The wire is now fed through a totally unmanned production line.

You’d expect that to fill Nautech’s manufacturing workers with dread, and initially, Turner admits there was nervousness among staff about robots taking on some of their jobs.

“Now they appreciate the robots,” he says. “They do the mundane jobs and the level of skill in our workforce is increasing. Who wants to insert 20,000 small screws into one product, every month?”

Callaghan Innovation’s Phil Anderson, Business Innovation Advisor for Manufacturing and Niche, says the initial resistance to robots often disappears when employees realise the ‘cobots’ complement the human workforce and can be used to reduce monotonous or risky tasks.

“People pretty quickly see that robots can actually make work safer and more interesting for them. These robots have been designed to work alongside employees and they can reduce repetitive strain and accidental injuries by automating dirty, dull or dangerous tasks.”

Nautech now employs less assembly staff but more technicians and engineers. Even while the company was growing at 20 - 30 per cent per year, it was adding very few new staff due to the efficiencies it was gaining in its automated manufacturing processes. 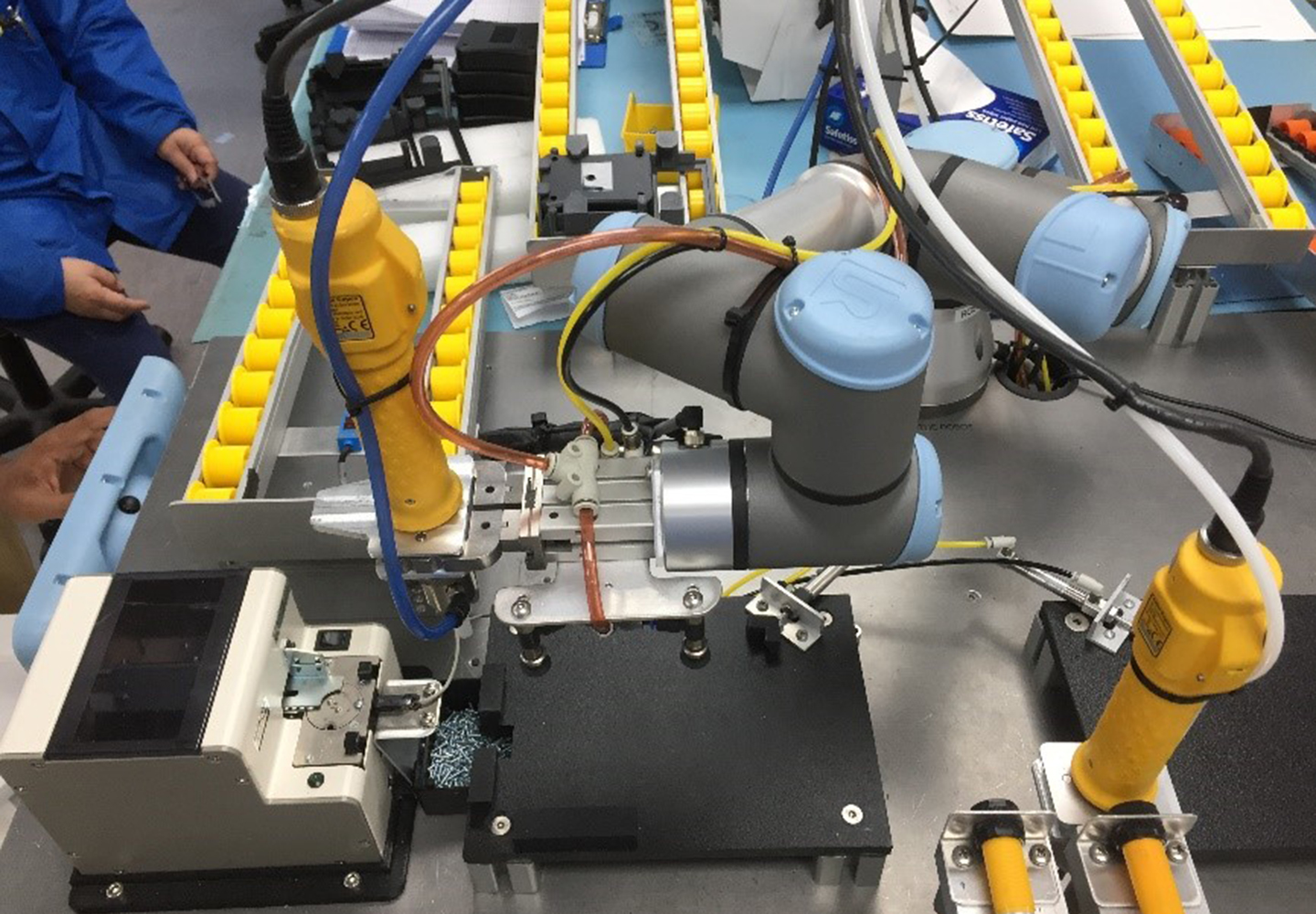 A UR3 robot typically cost around $35,000, but that outlay is typically only half of the cost of integrating the robotic arm into the assembly line. Design, tooling and time spent implementing the system adds to the cost.

“We now have two dedicated robotics engineers in our production engineering team. Getting the accuracy and repeatability is a challenge, it typically involves costly tooling,” says Turner.

He estimated the return on investment (ROI) period for a UR3 ‘cobot’ at 12 months.

“If we could keep the robot busy 24 hours a day every workday, it would be more like six months.”

The costs and time involved with deploying robots in manufacturing had led Callaghan Innovation to offer one-month trials of a higher-capacity UR5 robot to New Zealand companies considering placing collaborative robots alongside their human workforce.

One company to take advantage of the trial was door and window lock and hardware maker Assa Abloy. In 2016 it compared Callaghan’s ‘Baxter’ robot with the UR5 model, ultimately determining the UR5 was more suitable to its needs.

It later deployed the UR5, dubbed ‘Victoria’ into its production line, creating a case study with Universal Robotics to outline the process. The result was better consistency of product, helping Assa Abloy more efficiently achieve its goal of ‘any colour, any key, any time’, producing any key or lock in any colour with a two-day turnaround.

That was a result previously only achievable with larger scale production and Assa Abloy also calculated the UR5 as paying for itself after just 12 months. Use of robots isn’t limited to manufacturing.

At the end of 2018, Air New Zealand took advantage of Callaghan Innovation’s UR5 trial to explore opportunities to deploy the robotic arm to gain manufacturing efficiencies.

"It is difficult to justify the expense of sourcing a robotic arm for a short period of time when success is not guaranteed," says Air New Zealand's 3D Printing and Advanced Manufacturing Project Manager, Wayne Thomas.

Air New Zealand was able to trial a UR5 robotic arm as a tool to automate its sandblasting process.

"By removing this barrier, Callaghan Innovation enabled us to investigate what did and didn’t work and we were able to make our mistakes early and learn from them.”

As a result of the trial, Thomas’ team has proved the concept is viable for the airline.

“We now know the robotic arm could work for the business but we didn’t have the risk of wasted expenditure that would have come from buying and experimenting with own robotic arm only to find it wasn’t a good fit.”

“The student internship allowed us to get a dedicated robotic engineer which really helped speed up the implementation of new projects,” says Turner.

The intern employed on the robotics project is now employed full-time as an engineer at Nautech, which had allowed him to gain permanent residency.

“It is a great example of using a student grant to improve productivity,” says Callaghan Innovation advisor Phil Anderson.

“Whilst many New Zealand companies are struggling with how to begin ‘Industry 4.0’ adoption, this clearly shows how to de-risk employment and leverage new skills.”

Chris Thomson, Group Manager Advanced Manufacturing, says the team has a breadth of expertise and can develop customised industrial robotics and automation systems for manufacturing and production processes.

Past examples of RTS projects include an automated solution for Sanford that integrates machine vision, robotic and sensing technologies to efficiently process and open mussels, and an advanced robotic-based solution with Ovine Automation which performs critical steps in the lamb de-skinning process, including cuts and clearing. These projects delivered world-first prototypes which Callaghan Innovation’s industry partners went on to commercialise.

Find out more about how Callaghan Innovation can assist you to trial a collaborative robot in your workplace or get in touch with our Research and Technical Services team.

Trial a UR5 collaborative robot in your workplace to see how automation could benefit you, including increased productivity and employee satisfaction.