Most of us have one – a drawer or cupboard that’s home to phones, laptops and other electronic devices we no longer use, but aren’t quite sure what to do with.

Collectively, however, we’re sitting on a gold mine.

A growing hunger for gadgets, few repair options and shorter product life cycles are leading to massive amounts of electronic waste globally. In 2019 the world generated 53.6 million tonnes of e-waste, according to the 2020 Global E-Waste Monitor – a staggering average of 7.3 kilograms per capita.

That waste, however, contains many rare and valuable raw materials, including precious metals such as gold. Given the large and growing volume of e-waste globally, this represents a vast ‘urban mine’, which in 2019 was valued at approximately US$57 billion.

The problem is, e-waste, with its many and complex components, isn’t cheap or easy to recycle.

As a result, only around 17% of e-waste is effectively recycled, recovering just US$10 billion of those raw materials, with the rest left untapped in those drawers, recycling stockpiles or causing environmental degradation in landfill.

It’s a massive global problem, but one in which a Kiwi cleantech firm sees rich opportunity.

From waste to value

Mint Innovation has developed innovative technology to recover metals from complex waste streams. In particular, it has developed a process that uses a mix of hydrometallurgy and biometallurgy (the use of liquids and microbes, respectively, to separate out metals) to extract pure gold from e-waste – an innovation that was recently recognised as the Most Innovative Deep Tech Solution at the 2020 NZ Hi-Tech Awards.

The firm was founded in 2016 by CEO Dr Will Barker, alongside a fellow veteran of LanzaTech – the pioneering, NZ-founded company that uses microbes to turn waste gas from steel plants into ethanol.

Having caught the deep-tech startup bug from their time at LanzaTech, they looked for a new opportunity and one, like LanzaTech, which would harness biotechnology to capture a waste-to-value opportunity, explains Mint Innovation’s commercial lead Thomas Hansen.

“In particular, Will looked at potential waste streams where the difference in value between the waste and the end product that could be extracted was potentially quite large, and e-waste and gold were seen as having that value,” says Hansen.

“People don’t expect to be paid for their old laptop or mobile phone, and gold is gold – it’s a very valuable, known commodity that people are always wanting to buy.” 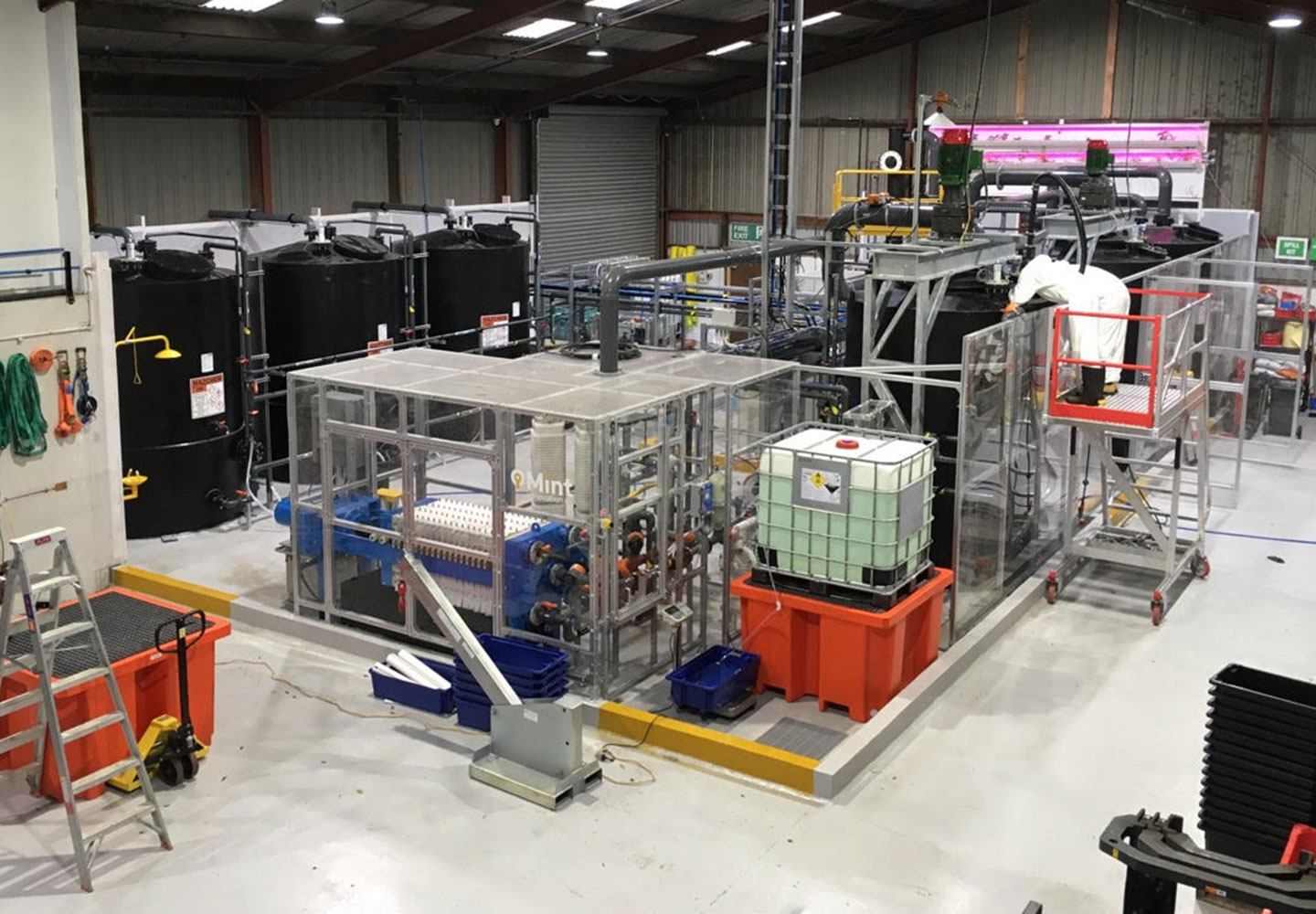 The development of Mint Innovation’s ‘biorefining’ technology – a low-cost process that uses inexpensive chemicals and naturally sourced microbes – has been led by the company’s co-founder and chief science officer Dr Ollie Crush.

Taking the science behind the firm from lab to commercial scale has been the company’s biggest challenge so far on its innovation journey, says Hansen. Raising $5.2 million from both local and offshore investors in 2018 helped Mint Innovation establish its pilot plant in Auckland’s East Tamaki in 2019, which is now processing 1 tonne of e-waste at a time.

The company, which was initially headquartered at the Level Two deep-tech incubator in Auckland’s Parnell, has accessed a wide range of Callaghan Innovation support– including Project, Growth, Student Experience and Career Grants, as well as tapping into the agency’s R&D Services, and networks – as it grew from lab to commercial scale.

Phil Anderson, a Callaghan Innovation business innovation advisor for the HighTech Products sector, says the company has made particularly good use of Student Experience Grants, which have allowed the company to employ a number of university students over the past three summers. This has enabled Mint not only to pursue R&D at a faster rate during those periods, it has also led to three interns being offered (and accepting) ongoing employment after graduation.

Current recycling systems that involve shipping waste offshore to large, centralised processing facilities foster an ‘out of sight, out of mind’ mentality to recycling, says Hansen. Mint’s solution is a plant that’s similar in function and size to a microbrewery, making the technology more accessible.

“Another problem with current e-waste recycling systems is they simply don’t have the capacity to process all the waste that’s being produced. Our technology allows for a better way of processing, but it’s also a decentralised and scalable solution so that, in time, each and every jurisdiction that wants to have a circular economy in electronic- or other metal-rich waste, can.”

The firm is currently raising US$10 million for the next stage of its commercialisation journey, focused on entering the Australian and UK markets. By the end of 2021, Mint Innovation aims to have two commercial facilities successfully up and running.

Hansen intends to help bring on board partners who can help the company accelerate the adoption of the technology – anyone from downstream collectors of e-waste, such as existing recyclers, to electronics producers.In future he sees Mint Innovation’s technology able to be applied to any complex, metal-rich waste stream.

“We want uptake of this technology to be limited only by the ambition of our customers. Ultimately I see the company as a licensor of this circular economy cleantech – Kiwi innovation enabling the world to better manage its waste.”