When Russian-born Zarina Bazoeva arrived in New Zealand as a financial auditor on secondment with accounting firm KPMG a decade ago, she never expected she’d become a startup entrepreneur.

But an invention developed by her father, Dr. Oleg Bazoev – initially solely used to strengthen concrete in dams, bridges and high-rise buildings in Russia – has found a new role in efforts to reduce carbon dioxide (CO2) emissions.

The production of concrete contributes around 8% of global CO2 emissions each year, and is increasingly in the sights of governments that have set net-zero carbon emissions goals for the middle of the century. Making a tonne of cement can produce as much as 800kg of carbon emissions.

The concrete industry has managed to reduce emissions from cement making by 10% over the past 15 years, mainly through the addition to the mix of “fly ash”, a waste product from coal-fired power stations and boilers.

“The problem is that including fly ash can also double the time it takes for the concrete to set,” says Zarina Bazoeva.

With concrete taking up to 56 days to reach the required strength, that means longer building timeframes and higher construction costs.

But the problem can be solved by adding a mineral-based concoction that makes up just 3% of the mix, but allows up to 45% less conventional cement material to be used. D5 Green is a mineral-based mixture that includes natural pozzolans – pumice-like volcanic material that’s common across the volcanic plateau of the central North Island.

“All sorts of chemical reactions happen when pozzolans are mixed with cement,” says Bazoeva.

“They fill in the pores in the concrete making it stronger and completely waterproof. It also dries faster, reaching what is called ‘character strength’ on the seventh day, rather than the 28th day.” 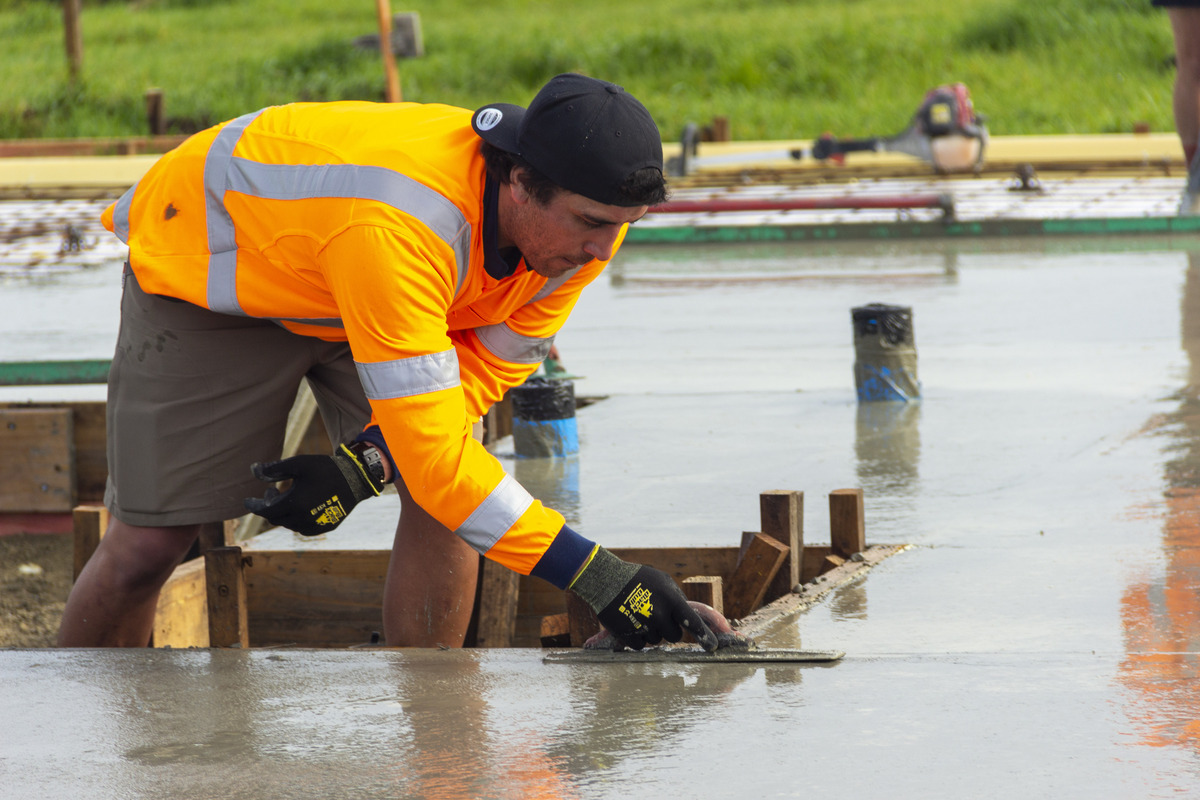 An R&D project funded by a Callaghan Innovation Project Grant saw Neocrete and its partners, LT McGuinness and Allied Concrete, set out to rigorously test D5 Green mixtures. The work took place at Callaghan Innovation’s labs at its Gracefield campus in Lower Hutt, with engineering firm WSP carrying out stress-testing of the concrete at its own lab nearby.

“The project was spearheaded by Callaghan Innovation research scientist Nan Yang, who conducted the trials and provided independent analysis of the test results,” says Bazoeva.

“With Nan’s help we were able to test a large variety of mix designs in a short time frame, providing us with valuable data on D5 Green performance for different concrete grades. Nan’s report provided recommendations on how to further develop the product, setting the foundation for future R&D.”

“Working with the students was incredible because they’re so committed and curious,” Bazoeva says.

“One day our cement mixer broke. One of the students used her 3D printer to make a new part to replace the broken one. That’s innovation.”

“People can use the tool to enter a concrete mix design and it will calculate the environmental impacts, for example, the amount of mineral depletion and the embodied CO2.”

She sees the e-calculator, which was developed in partnership with sustainability consultants Edge Environment, as a crucial tool that could encourage uptake of D5 Green in the concrete industry.

The eCalculator confirmed for Neocrete that mixes of concrete containing D5 Green and fly ash could reduce CO2 emissions by up to 40%.

Use of D5 Green by commercial builders will require buy-in from engineers who have influence over the type of concrete used in construction.

“The cost of failure in that industry is high, so they’ve been slow to change,” says Bazoeva.

Neocrete, similar to many pre-revenue early-stage businesses that Callaghan Innovation works with in the construction sector, was supported to validate their technology idea and their business model through advisory services from a cross-functional team of experts.

This enabled them to refine their R&D and commercialisation plan and to successfully raise co-funding for the R&D through the Callaghan Innovation Project Grant. Neocrete were also connected early to building research organisation BRANZ for building code compliance support that also informed their R&D plan.

To actively promote collaboration in an industry sector that remains fragmented, Neocrete were connected to other businesses that Callaghan Innovation works with for opportunities to partner locally as an additional pathway to market. Zarina Bazoeva was among the six Inspiring Innovators featured at a Callaghan Innovation event on World Entrepreneurs' Day in August 2020, where she shared her journey of innovation with 100+ businesses to inspire them to embrace innovation to have an impact economically, environmentally and socially.

With New Zealand pouring four million cubic metres of concrete each year and producing 1.4m  tonnes of greenhouse emissions in doing so, use of D5 Green across the board could reduce carbon emissions by 500,000 tonnes.

“That’s the equivalent of removing 100,000 cars from our roads each year,” Bazoeva says.

China, India, the US and the European Union are the biggest users of concrete in the world, so D5 Green also has strong export potential.

“We don’t need a lot of technology or space to produce D5 Green, so we can scale this up fairly quickly,” says Bazoeva who kept her father apprised of the trials during the COVID-19 lockdown period by sending Whatsapp video updates.

“Callaghan Innovation’s support  has allowed us to commit to doing this work so much faster than we would have,” says Bazoeva.

“It means we now have a product in the market that can make a meaningful difference to the environmental impact of concrete production.”

A range of Research & Development funding and grants to add scale, depth and return to your R&D investment