Auckland-based Hectre develops software that digitises many previously paper-bound activities on orchards, such as harvest management, timesheets and payroll.

NZ’s apple industry has a global reputation for quality and Hectre’s software tools have been developed over the past four years in close collaboration with orchardists here, where they’re now used by more than a third of apple growers.

But they’re also increasingly finding favour in offshore markets, particularly in the US states of Washington and New York.

“They’re among the biggest apple-growing regions in the world,” says Hectre R&D Manager Luke Butters, “so they’ve been a great starting place for us as we pursue our vision to enter many markets around the world. We figured if we could succeed there, we could succeed anywhere.” 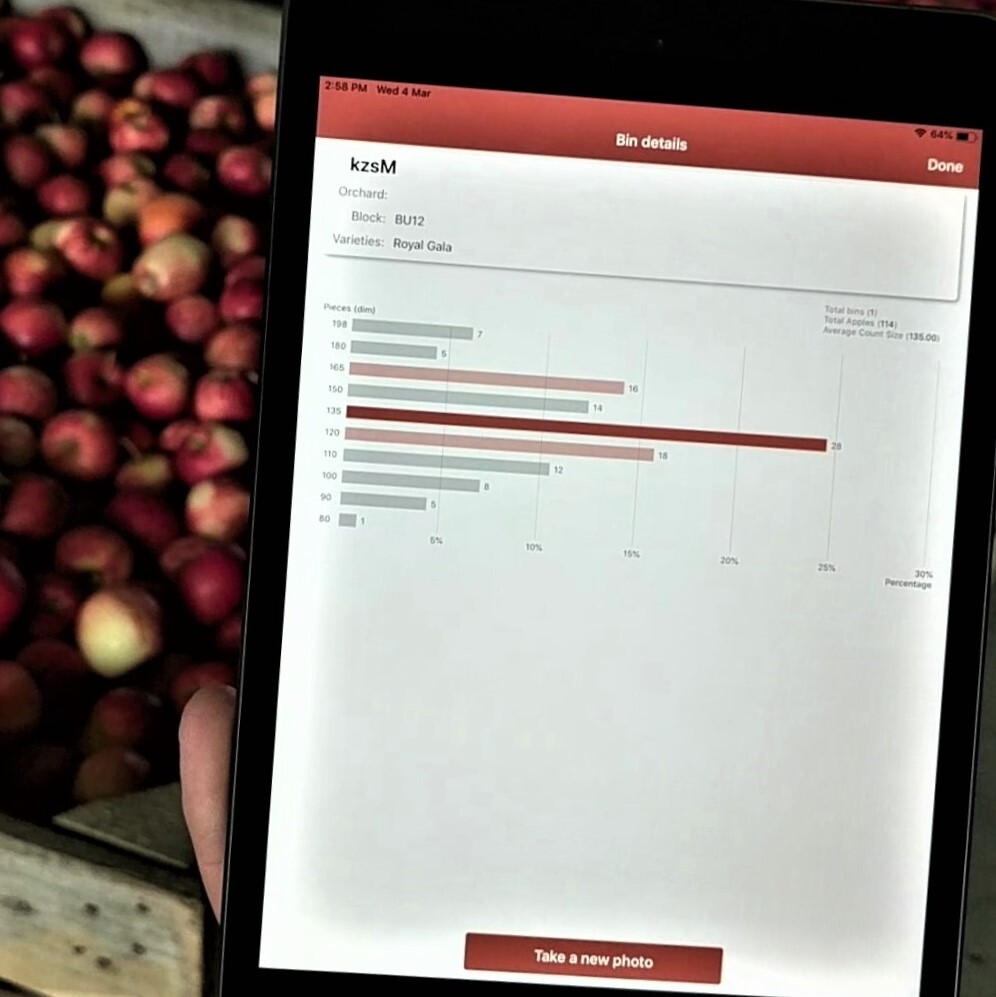 In an industry where margins can be slim, and returns impacted by unforeseen events – such as adverse weather – creating efficiencies through digital tools can mean the difference between profit and loss, explains Butters.

Helping Hectre stand out from competitors in major apple-growing markets like Washington and New York has been the development of a fruit-assessment tool called Spectre.

By simply taking a top-down photo of an apple bin using an iPhone or iPad, Spectre users can immediately capture information on the fruit it contains, such as size and colour profiles, with 95% accuracy.

Growers have traditionally relied on their own eyes and judgement when making such calls out in the field. However, being able to more accurately understand what’s in each bin has multiple benefits.

Growers will often request staff pick fruit of a certain size or colour, and assessment of what’s going into bins early in the day helps ensure everyone is on the right track, or if further staff training is required.

For packhouses, it allows staff to more accurately prepare their packing lines and packaging for the fruit that’s coming in, creating efficiencies.

And for exporters and marketers, it allows them to lock in deals ahead of time with greater certainty.

“Some of the big US supermarket players have been known to turn away truckloads of fruit because it doesn’t meet their exact size and colour specifications, and that fruit will end up just being dumped,” explains Butters. “Trying to reduce that kind of waste, and build transparency and trust between operators is part of what we’re trying to do.”

Ashna Khan, a Callaghan Innovation Agritech Customer Manager who works with Hectre, says Spectre has been readily adopted in the apple and citrus industries. 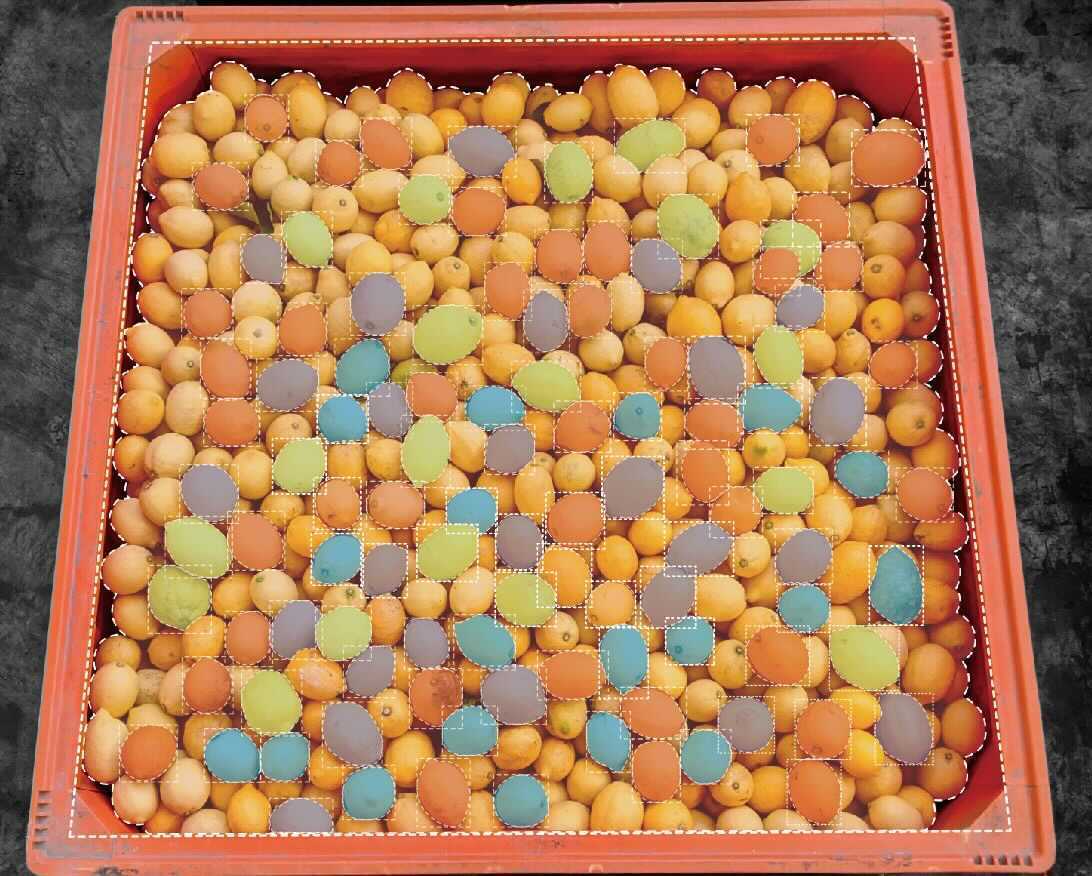 Cream of the crop

Butters was employee number-four when he joined Hectre two years ago and was charged with leading Spectre’s development.

He says while the company harnesses complex technology – such as computer vision, machine learning and cloud computing – its mission is to make using it simple and empowering. Sourcing engineers skilled in these technology areas, however, was an early innovation challenge.

“When we started there weren’t many people out in industry who had these skill sets. However, the universities were teaching these to their computer science students, and encouraging them to undertake Master’s and PhDs in these fields.”

To help it source talent, Hectre has worked with universities and Callaghan Innovation to find and ultimately onboard R&D staff – with Butters being the first. After completing his Master’s, during which he undertook an internship supported by a Callaghan Innovation R&D Experience Grant, he was supported into a role in the company through a R&D Career Grant before becoming a permanent employee.

To date, seven members of Hectre’s R&D team have come onboard through a similar process.

“Callaghan Innovation has been a massive help to our business,” says Butters. “By working with them, and AUT and Waikato universities, we’ve been able to find a lot of talent in the right areas to fuel our R&D pipeline,” he says.

In its first year in use during the last US apple harvest, Spectre scanned 60,000 apple bins. And feedback from that experience is helping inform the next phase of technology development.

“We now have a set of large US packhouses using the product, and they’ve been asking us ‘instead of taking a photo of each bin, could we get a video of the bins from the [open] top of the truck, so we can get a whole truckload of results at once?’ So that’s what we’re working on building now,” says Butters.

“As a Kiwi it makes you feel proud to be in an environment where there’s so much innovation like that going on, and which is providing great opportunities for young engineers.”

From Ruatorea to the world – pharmaceutical firm Rua Bioscience is going public to help it take medicinal cannabis products global.

Environmental innovators Citizen rescue unsold bread to make beer, then use the ‘mash’ from that process to make bread.

A ground-breaking trial has proved that a Kiwi cold sore treatment made from honey works just as well as the pharmaceutical alternative.