Anna Bradley-Smith digests the results of Idealog and Callaghan Innovation’s research into New Zealand attitudes to failure in business.

What do Kiwis think about failure?

There’s a stack of papers on the table at the front of the room, your name is on one of them and beside it there’s a single letter. Your stomach is curled in knots; this time you didn’t do so well. You’re expecting three simple lines etched in red into an F, you’re ready. A quick scan to check and that paper will be stuffed straight into your bag – no one needs to know. You look around the room for solace, another forehead beaded with sweat – surely you’re not alone. You’ll hardly even look at it, maybe a glance at the comments, confirm where the mistakes were made, but that’s all.

The feeling of helpless vulnerability and shame that failure brings is familiar to most. We do what we can to avoid it, and when we sense it approaching we react in different ways – throw things at it to try and fix it, run from it, even cheat. Often we can keep it to ourselves, deal with it privately.

But in business, the stakes are higher, the failures often more public. The world is there to see it, and they will judge. There’s no stuffing that one in the backpack and claiming it was a B-minus. So what do Kiwis think about failure in business? And could our attitude be holding New Zealand back economically?

In May this year Idealog and Callaghan Innovation conducted a survey to find out. And throughout the 190 responses there were some clear, but slightly paradoxical, themes:

The levels of agreement were largely dependent on whether respondents were in business for themselves or others. Those without experience often showed more optimism towards failure and its perceptions, or arguably naivety about the reality of the situation. 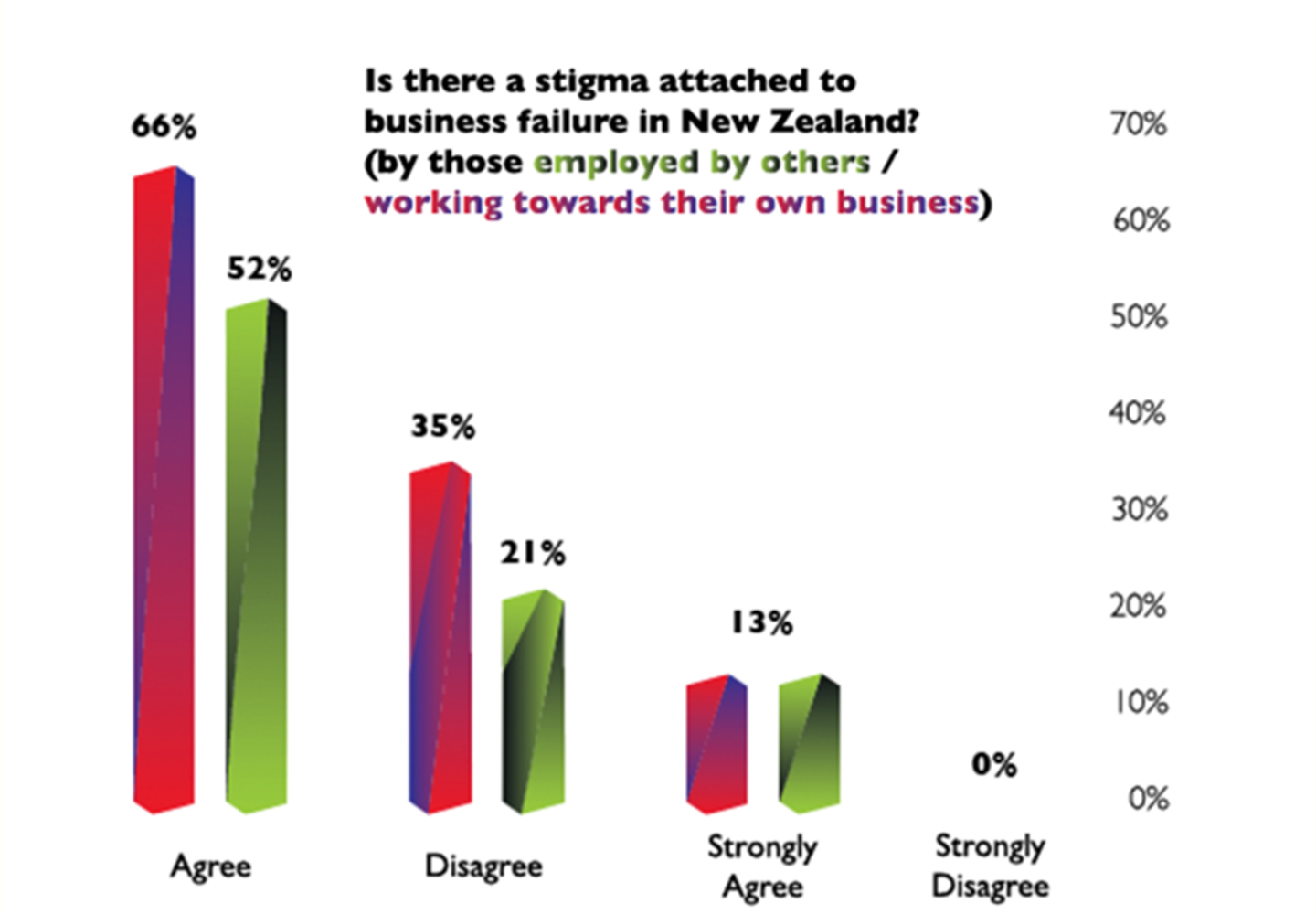 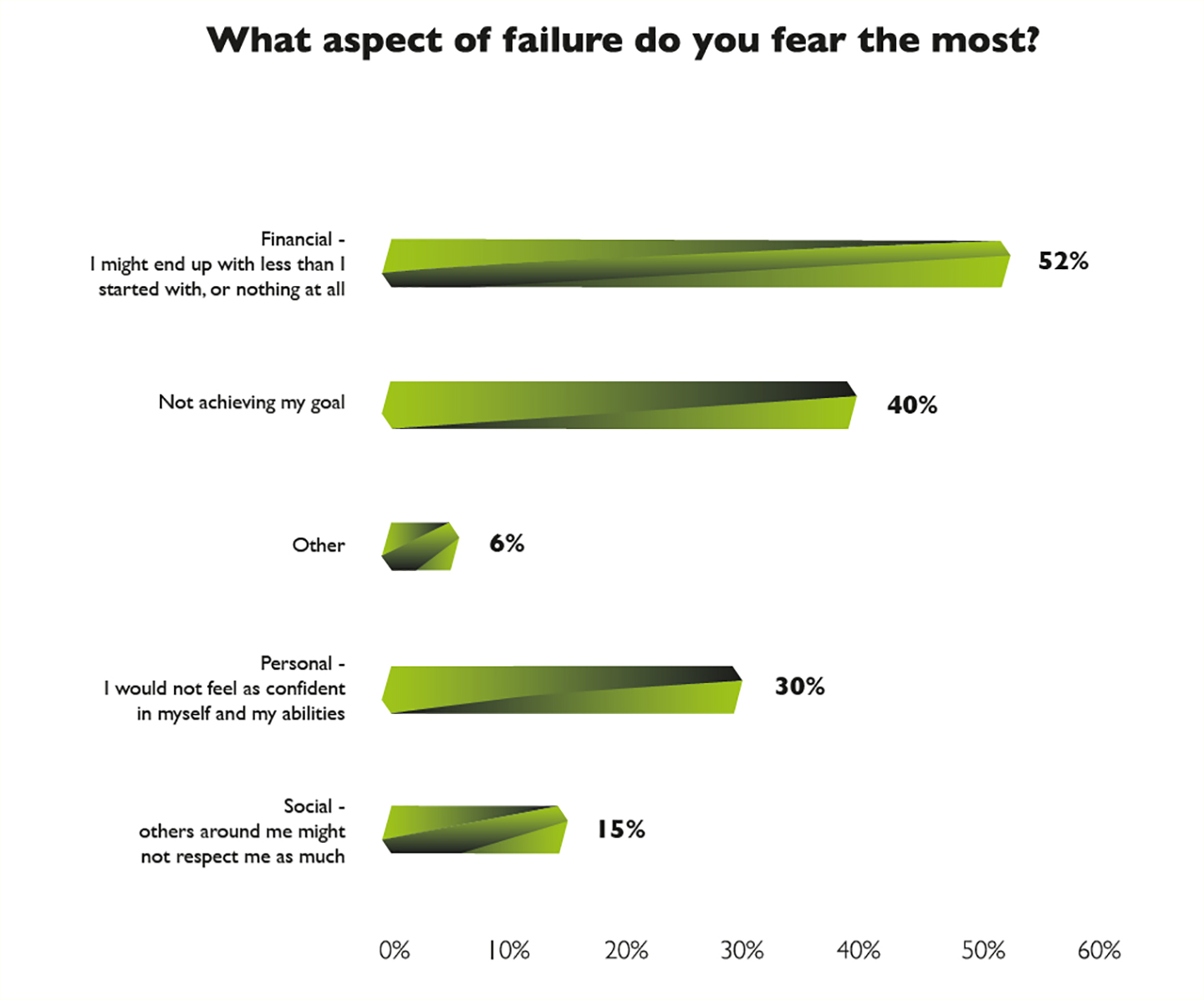 One widely-shared opinion was that stigma is strongly attached to business failure in Aotearoa. When failure occurs, most agreed public opinion is that you just weren’t good enough; a lack of trying is not so much the issue.

Respondents were split half-and-half over whether a lack of trying was the perception for failing. Those already in business were more likely to think people thought they hadn’t tried hard enough, and were also much more likely to link stigma with failure, although 66 percent of those working towards their own business also agreed. The feeling of a stigma associated with business failure was especially prevalent among men.

New Zealand’s “tall poppy syndrome”, modest culture of innovation and population size could play into these judgements – but it would be hard to argue in favour of accepting stigma, as it is defined (a mark of disgrace associated with a particular circumstance, quality or person), for giving something a go and having it not work out.

While the responses showed others’ failures impacted our perceptions of them, we also, paradoxically, love a tale of redemption. All respondents believed a story about someone who keeps trying and eventually makes it is a story the country likes. Inevitably that trier would have a few failures under their belt and at one stage or another would have felt stigma’s disgrace. Again, those who are yet to be in business show a more romanticised approach to failure, with 74 percent believing in the story compared to 67 percent of those who work for themselves.

So is it the stigma associated with failure that scares potential entrepreneurs? Apparently not. Overwhelmingly, the biggest fear around failure was financial loss. That was particularly true for those yet to take the leap into working for themselves. 52 percent said money issues were their biggest concerns, outranking crises of self belief, loss of face and the lack of achieving goals.

The fear of not achieving goals loomed second largest for all demographics. Those already in business were less nervous about being financially worse off, but placed more concern in a loss of self-belief and respect. More than half of those who had invested their time, money and brainpower in a project said they would feel like a failure if their business failed. Some skin in the game appears to bias how personally one takes successes and failures, and also how failure is dealt with. 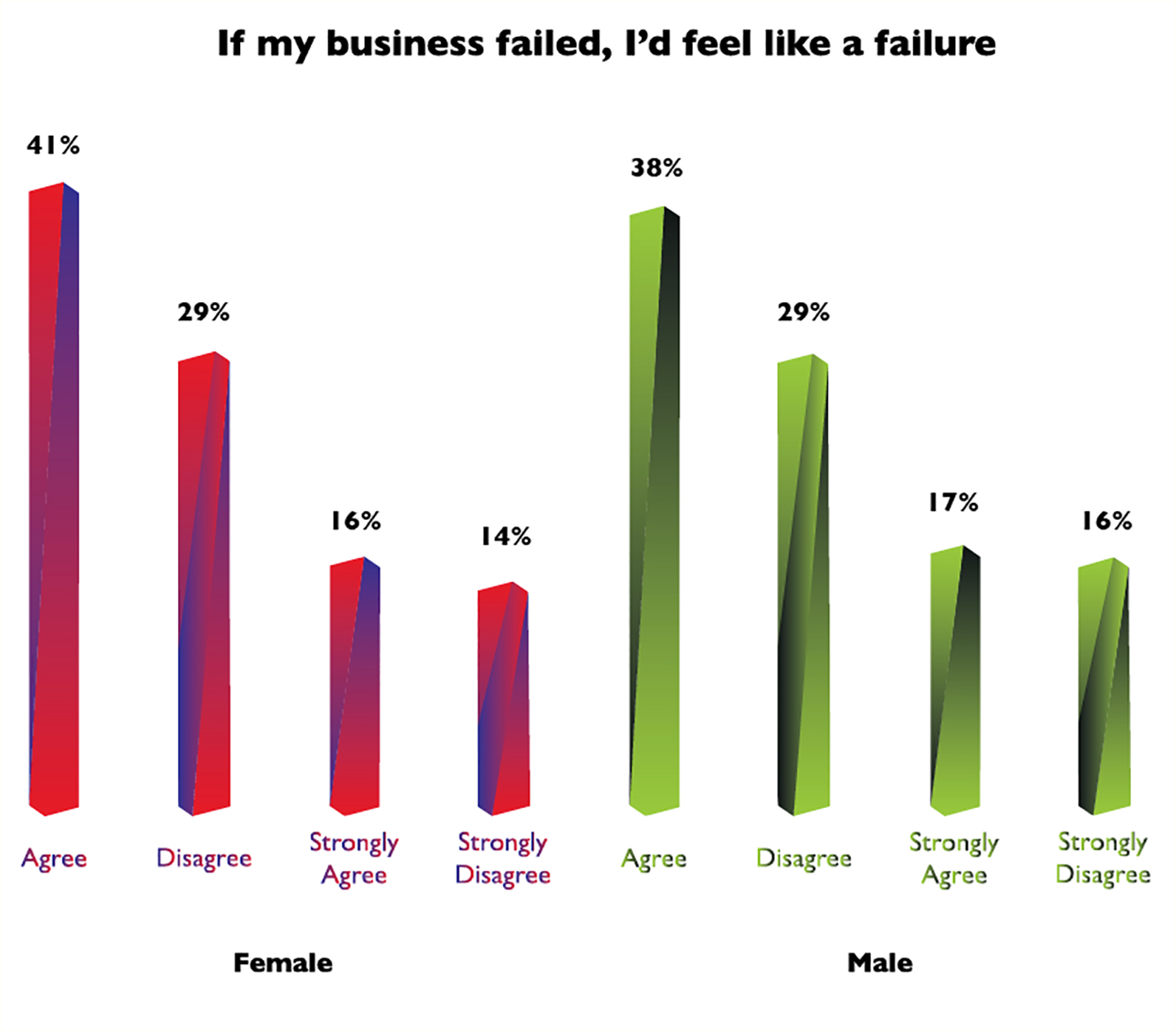 What about the ladies?

More than 30 percent of female respondents strongly agreed failing fast and moving on was best, compared to 25 percent of males. They were also more than emphatic than men that failing wasn’t an option, but if it did happen women were more likely to say they wouldn’t be stopped and would pick themselves up and try again.

One third of the survey respondents were female. 33 percent of business owners and 35 percent of those working towards their own business were female. Women were outnumbered by men in those who had previously owned a business, and they were more likely to think they would fail at least once before they had success.

All in all, women appeared less likely to go into business than men, despite being prepared for the worst-case scenario of failure, and despite a greater percentage considering themselves entrepreneurial than their biological counterparts. One belief that emerged strongly from all respondents was: if you fail once, you try again. Only three percent of respondents said they wouldn’t have another shot if their business failed, and half of all respondents felt strongly about not giving up after failure. It would seem the onset of stigma does not outweigh the entrepreneurial drive, especially as slightly more than half of the respondents expected to fail at least once before they had success.

Those who were yet to own their own business were more likely to see failure as a valuable learning tool – arguably donning a pair of rose tinted glasses or with the ability to be impartial – than those already in the game. That is not to say those in business didn’t see the value in failure, with 83 percent agreeing it was something to learn from, but they were much more likely to say failure wasn’t necessarily a part of the learning process.

Only three percent of respondents said they wouldn’t have another shot if their business failed, and half of all respondents felt strongly about not giving up after failure.

On the whole, respondents said they were just as likely to invest in an entrepreneur with a few failures than one who had no track record, but there was a much stronger split when it came to investing in someone who had been bankrupt.

Those in their own business were less likely to invest in a business in which the founder had previously gone bankrupt, at 57 percent, compared to 45 percent of those working for someone else. This means millionaire business people such as Walt Disney, Larry King, Mark Twain, Henry Ford, H. J. Heinz and would be struck off investment lists by a number of Kiwi business people.

Obviously failure isn’t confined to our southern island nation. People have been trying, failing and learning since the beginning of time. But over the last few years there’s been a surge in articles, books, podcasts and talks held on the importance of embracing failure. There’s even the FailCon conference, which was started in San Francisco in 2009 in an effort to rid the taboo of failure. Its website lists the conference as being for technology entrepreneurs, investors, developers and designers to study their own and each others’ failures to prepare for success, and it has spread to five countries.

From the new leader of marketing communications at Apple, Tor Myhren, who said fear was the biggest problem in American business culture and punishing risk-taking was the worst thing you could do following a very public failure of a 2006 Super Bowl ad, to Domino’s Pizza acknowledging the failure of its cookie pizza with its 2014 commercials saying “failure is an option”, people are talking about getting things wrong. And in order to encourage entrepreneurship, we have to be able to celebrate creativity and acknowledge when it didn’t work out.

Think about the children 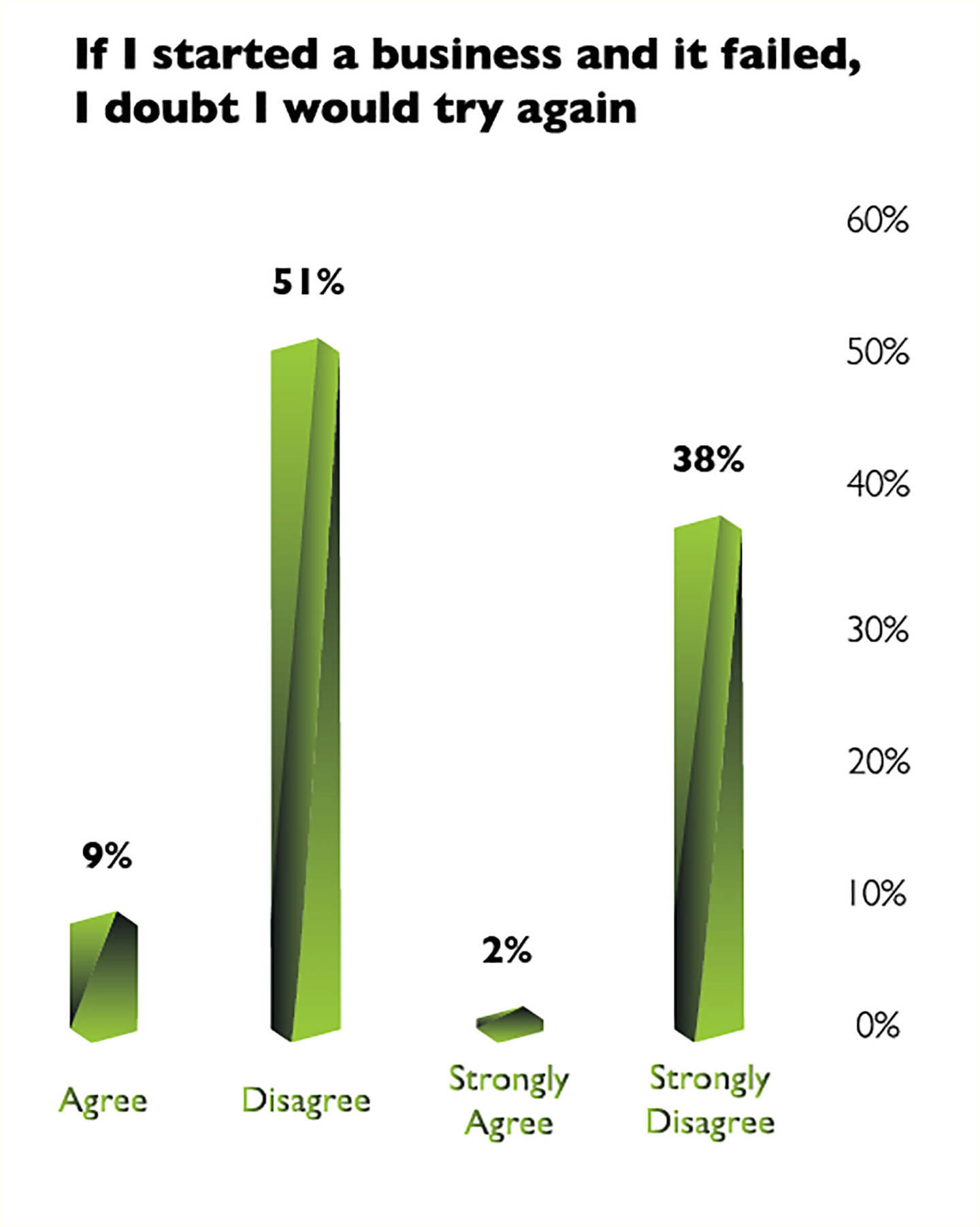 So how do we change attitudes to failure at home? Stanford University professor Carol Dweck advocates teaching children the importance of the phrase “yet”, or rather – “not yet”. In an interview with NPR, Dweck said giving children in schools a fail grade made them think they were “nothing, and nowhere”, but if you gave them a “not yet” there was a path to the future and it showed them they were on a learning curve.

We can learn from our mistakes and others can too. But very few of us want to fail ourselves and, judging from the survey results, Kiwis in business take failures personally and feel judged.

Dweck stated the importance of highlighting to people young and old that abilities could be developed with a growth mindset rather than a fixed mindset – one in which people felt failure brought about judgment of their intelligence. In schools children should be engaged with challenges, processing errors and learning from them, and should be encouraged to be innovative, rather than on the hunt for the next A, she said. Giving awards or praising children for talent or intelligence was not as valuable as praising them for effort, strategy, focus and perseverance. It created hardier, more resilient people, she said.

Some workplaces have awards for ‘heroic failure’ or ‘worst idea’ and celebrate the craziness of creativity, and for good reason – in Silicon Valley it is often said investors are most interested in the riskier, more out-there ideas. They’re the ones pushing the envelope.

Taking off the reins 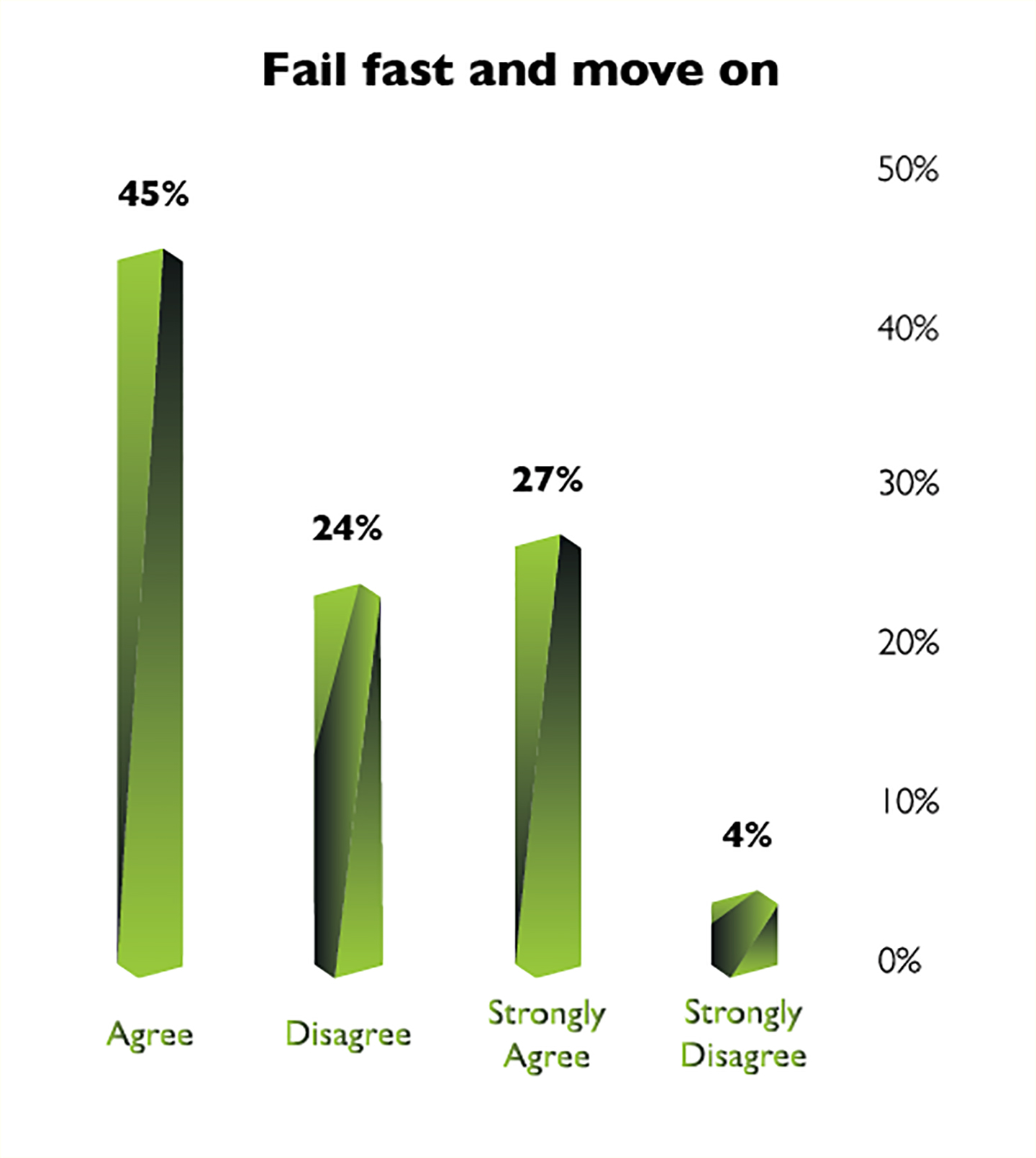 If the stigma around business failure that 76 percent of the survey respondents said exists, it would seem that some dialogue is needed before heroic failure awards are commonplace in New Zealand.

It’s clear from the survey that failure is widely agreed upon as a valuable learning tool and that New Zealand loves the story of someone who keeps trying until they succeed. So, failure is largely seen as a positive thing in an abstract sense. But one of the major outtakes of the survey is that this is not really the case at an individual level.

We can learn from our mistakes and others can too. But very few of us want to fail ourselves and, judging from the survey results, Kiwis in business take failures personally and feel judged. 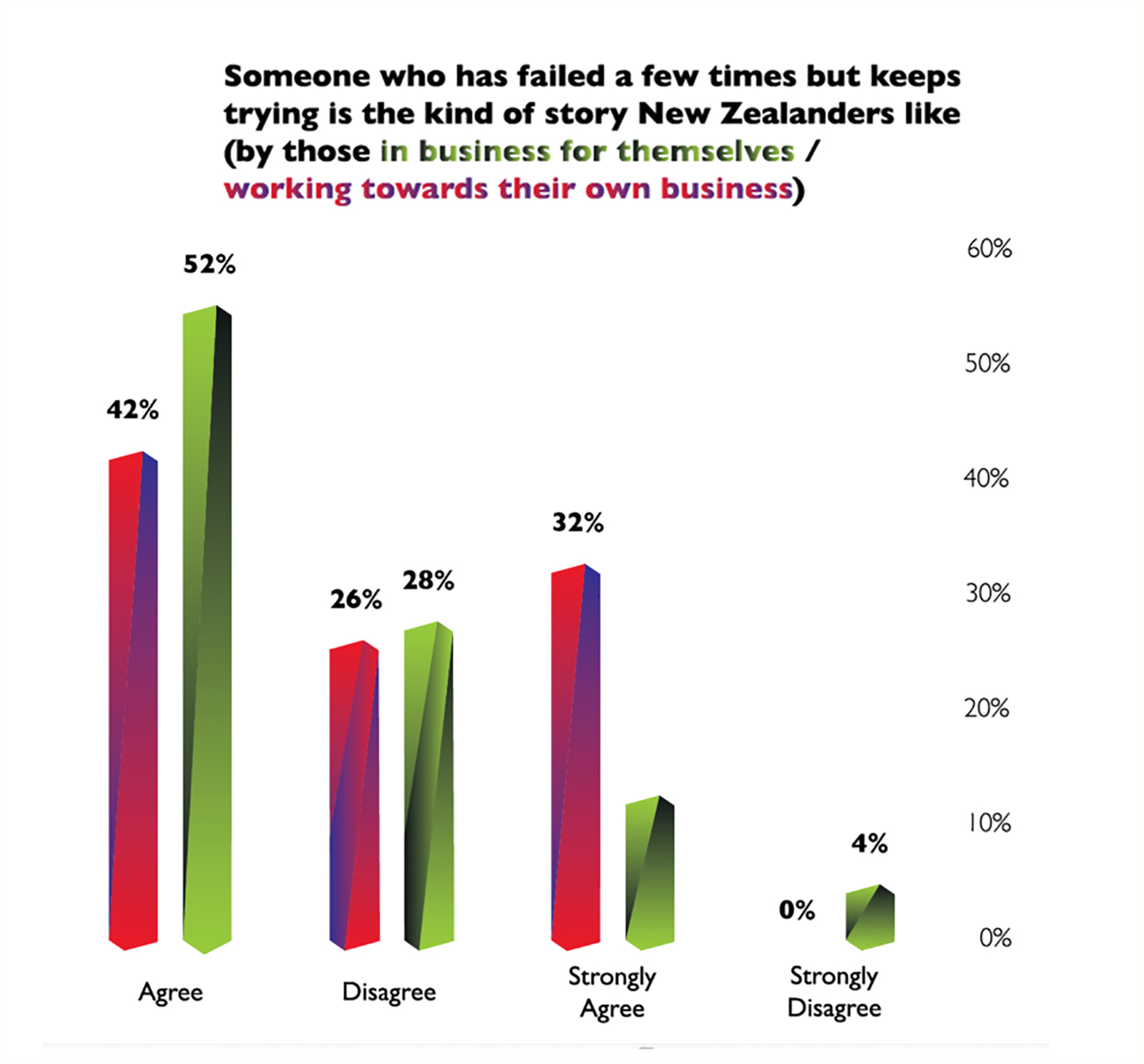 New Zealand has a great political framework for entrepreneurs, but its investment in research and development is half the OECD average. Would getting rid of the stigma attached to failure increase that? One would expect it to lead to more education and encouragement for being innovative, more attempts at creative business ideas, more failed projects and plans, but in turn more successes.

Waiting for that paper to be handed back and knowing there’s an F soon to be glaring up at you might not be so much of an embarrassment, but a challenge. Instead of being stuffed ashamedly into a bag, it could be scribbled on and reworked with others who weren’t squabbling for their zipper as well.

Yes failure really is an option. Find out why in the latest edition of Accelerate.